DRIME teams faithfully serve on street corners around the world, sharing the love of Jesus through drama and conversation. Today we have two stories from the DRIME Lomé team in Togo, West Africa. 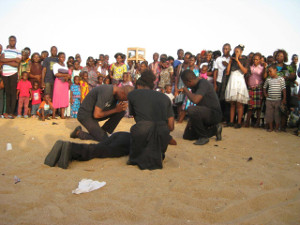 “Byron is a young guy about 25 years. He saw DRIME performing from the beginning to the end of our ministry time. He told us that he used to go to church but never really understood. Nobody had ever explained to him clearly the gospel as we did. He always tried to understand what the scriptures were saying and teaching, but had never really understood it. After explaining him more about the dramas and what Jesus Christ done for humanity and what is His will for us, he decided to confess Christ and confessed him as Lord and Saviour.” 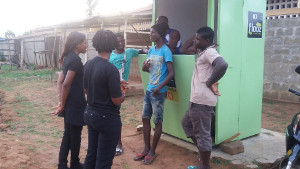 “After watching a drama called Deceiver, a man called Jerard decided to share with us about the work of darkness in his life, asking if the light of Jesus Christ
could also set him free. He had made pacts with spirits, and also looked to drugs for strength.

“We explained to him that it was possible, but he first needs to confess and accept Jesus Christ as Saviour. He said he already did it. During the conversation time he came to understand that he really needs to give his life to God through Jesus. He finished by confessing and we had a prayer time with him. We told him that it is very important for us to do spiritual work with him. Unfortunately he doesn’t have a phone number and he missed our follow-up meeting. We are still praying for him.”

If you’d like to hear more about DRIME Togo and our teams around the world, you can subscribe to our e-newsletter for updates and ways to be involved in the ministry.­­