A New Way to Introduce God

These are testimonies from two volunteers that our mission team trained on a recent mission trip to South Korea. These stories remind us how God is working on the streets in that country! 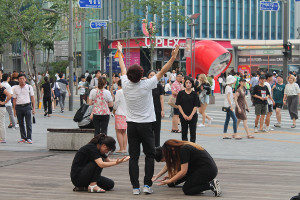 Last year when I received the DRIME training, I was disappointed that I didn’t have a chance to meet many people on the streets and have conversations with them. I prayed that this year I would have the chance to involve someone in conversation.

While doing street ministry in downtown Seoul, I met a man named Jimmy who is temporarily living in Korea on a break from the army. We had a good conversation, and near the end of our time together, I showed him the mobile version of the “Four Spiritual Laws.” After sharing the gospel with him, he followed the prayer and received Jesus Christ. We exchanged phone numbers so that we can stay in touch. At the end of our conversation Jimmy told me, “After I am released from the army service, I will go to church!”

During one time of ministry, I met a man named Matthew who was watching the dramas. I quickly found out was the manager of Busan Station [the area where the dramas were being presented]. He wanted to kick us out because he didn’t know what we were doing, but I shared with him about the dramas and what we were doing. He then shared with me that he is an atheist and doesn’t like aggressive Christians. As Matthew watched the dramas, he exclaimed, “This is a new way to introduce God!”

He wanted us to keep sharing the dramas and when I told him that we would only be there for 30 more minutes he said, “Oh! You could do more!” I prayed for him, and even though he wasn’t too interested in knowing more about God, he enjoyed the dramas. Pray that God would continue to work in Matthew’s heart.

You can see more pictures from our mission trip on our Facebook page. Stay tuned for more stories from South Korea!