Searching for Something Greater

As soon as I sat down on the curb with Tommy, he began to share how great it was that people were out on the street bringing a story to life. He had just gotten out of an abusive relationship, was on the edge of becoming homeless and was discouraged by how he had been treating his father who was just diagnosed with dementia.

He asked me, “Should I be the person I was a week ago, filled with financial empowerment and carelessness? Or should I be this guy you see today, filled with hopelessness?” It was so apparent that Tommy was searching for something greater. I asked him if he wanted to be someone completely different. Someone who felt loved, encouraged, inspired and transformed. He laughed at the idea for a while and then began to ask more questions about who the man in white was. 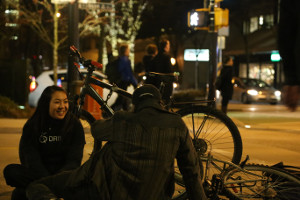 Tommy was overcome by the idea that he could be transformed by a man named Jesus and decided to surrender his life. He decided that night to commit his life to Jesus. I have been in touch with him, and following his commitment he has shared that life has been so much better. He has visited his dad more frequently and feels a sense of joy in his every day.

Tommy’s decision to follow Christ was nothing that I have ever experienced. He was a little apprehensive to commit his life but through encouragement and an idea that he could be transformed, he decided to do it. There were no fireworks, tears or excitement just an honest response of “thank you” and a long inhale of his cigar.