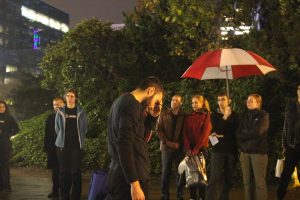 The idea of organized religion and going to church makes a lot of people uncomfortable. That’s why street ministry is a great way to build bridges by bringing the message of God’s love to them. “In our world today, technology makes us more connected than ever,” says DRIME Vancouver volunteer Sheldon. “And at the same time, it leaves a lot of people feeling isolated, lonely, and disconnected.” Many are looking for somewhere to belong and someone to listen.

God works in marvelous ways through street ministry, changing the lives of DRIMERs and those they meet. Sheldon has seen it happen countless times. “Sometimes through one conversation and other times through starting a friendship that lasts several years and yields many conversations and lasting fruit,” he says.

One of those friendships started when Sheldon met Randy*. He was watching the dramas, holding a drink in one hand and smoking a joint with the other when Sheldon approached him. Randy didn’t believe in the supernatural, but he found the dramas interesting. He was resistant to any ideas of Heaven and Hell, dismissing anything beyond what he could physically see. 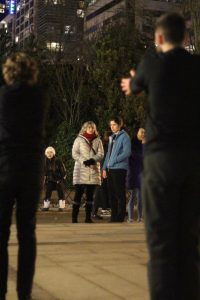 As the conversation progressed, Sheldon learned that he’d been hurt by the church as a kid. Randy eventually softened a bit. He could see that Sheldon showed genuine interest in what he had to say. Sheldon was then able to express how God really does love him and that it hurts Him when we’re hurt. “God gave me a way of explaining things and words that seemed to land with Randy.”

Sheldon convinced him to give church another try. Together they attended a Sunday morning service, and through that they began going to an Alpha course, which impacted Randy and awakened in him a hunger for more in life. That was four years ago and to this day they continue to stay in contact. Randy is still searching, but he has become much more open. Sheldon has seen how God is at work in his life, even if he doesn’t see it yet.

“It may seem counterintuitive trying to have deep conversations with people that you’ve just met, but in some ways people find it easier to be honest with people that they have no history or baggage with,” Sheldon says.

Approaching people to talk about spiritual things intimidates a lot of people, but it’s more challenging than it is downright frightening. The challenge is that each person is different, with their own struggles and passions. No conversation is ever the same. While challenging, this also means that evangelism can be really exciting, too! 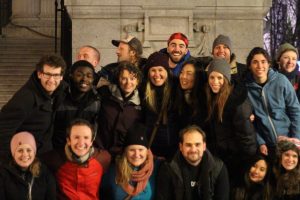 No matter someone’s background, personality or gifting, DRIME is a way that any Christian can learn to share their faith. It’s more than just dramas, it’s about stepping into conversations where God is already at work. “God always brings people our way who are searching or are ready to hear about him, and we are blessed to be able to do far more than perform — God allows us to be conduits of His grace and love, personally connecting with many people.”

Dramas effectively engage an audience, and this provides a way to connect with someone who has stopped to watch. When DRIMERs start a conversation with an onlooker, it can open the door to deep and meaningful conversations with strangers. Because of that, people — who would never step through the doors of a church — have the opportunity to encounter Jesus, “the man in white”.

If you missed it, read what led Sheldon to get involved with DRIME: Sharing Jesus on the Streets, Sheldon’s Story.

*Name has been changed