Last month, we sent a mission team (from Canada and Kenya) to continue working with believers in Uganda who were trained in January. The team had a fruitful two weeks partnering with the local church there. Together, they engaged 223 people in spiritual conversations, and saw 93 people come to Christ! Here are some stories that the team brought back:

“I talked to Isaac. He loved the dramas, especially Jesus. When I asked if he was saved, and he said no, I asked how he would know when the time had come and he said he didn’t know. I asked if he knew the Gospel. He said he did, but that he had many questions – he asked why Jesus let Judas betray Him. I used this to explain the Gospel and asked if he wants to be saved. He said yes. Eric translated as I led the prayer so Isaac could pray in his own language.”

“I talked to two young girls, Sandy and Josie. Josie is born again and Sandy is an atheist. They were very interested in how to tell a cult from real Christianity. I prayed for their needs in finding a job, as well as for them to experience God.”

“Mark asked for prayer for his relationship with his father. I shared about my relationship with my dad and how God repaired it, and he told me that his problem with his dad was the same. I was grateful to be able to witness through my testimony.”

They Will Know You By Your Love 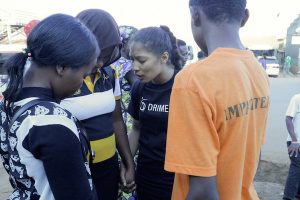 “While we were staying at the inn, we noticed that many of the staff were often watching us. One worker named Cindy observed the way we laughed and interacted, and she was so touched by us that she decided to come back to Jesus. Since that day, she was happier and more peaceful, even beginning to reconcile with her dad.”

“I had a conversation with one lady who was already saved, but then I asked her if there was anything we could pray about. She immediately said ‘I have my daughters in the house who are sick’. Three of us went to the house to find one girl sitting on the coach bent over vomiting in a tin. We prayed for healing, then she sat straight up and didn’t throw up again. Let’s keep praying that God may heal her completely. She was having mental problems which had been there for three months. Her name is Victoria.”

“Pray for the village prostitute. She got saved but then felt judged by the church so she left. She says she needs to make money and this is the only way so she doesn’t want to be saved.”

Note: Names have been changed