I had the opportunity to talk with a 17 year-old boy named Jaime* that I encountered sitting on one of the benches in the garden who was observing the dramas. After a few minutes, I approached her and greeted her. I asked her what she thought of the dramas, and she just said “Good.” We kept sitting there and watching the dramas, and after she asked me what we were doing and I asked her what she saw happening in the dramas. She told me that she saw the people in the dramas were suffering, angry, sad and desolate, but that someone (the person in white) was helping them. He had a relationship with the people with sad people and people with physical disabilities like the ones in the drama Ramgan. I asked her if she believed that only people with physical disabilities felt that way, or if he had ever felt that same way as the characters in the drama, and he said that yes, many times he had felt rejected and alone.

From there, the conversation opened up and he told me how he had been expelled from many schools in his 17 years of life and this is the reason why he moved to our city, Colima. I talked to him about how Jesus had been rejected and still continued being with many people. Jesus was alone many time but he was always with the Father and how Jaime could also be like this: never alone, but with God. 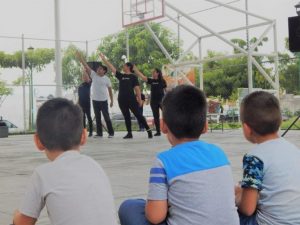