As one of the newer faces on the staff team, Johannes Bleeker (DRIME Latin America Regional Director) might be unfamiliar to some of the DRIME world. This isn’t the case in Paraguay, where Johannes and his wife Gabi have been known as parents to the DRIME Paraguay teams for many years. But this almost didn’t happen: when Johannes was coordinating youth ministry for Jesus Responde, he quickly turned down the opportunity to host a DRIME team.

“So, we have this dance group, and since you do youth with Jesus Responde, would you be interested?” Leading up to the summer of 2008, Johannes was contacted about hosting a DRIME missions team in Asunción, Paraguay, and it was an easy answer for him. “I said ‘No, I’m not interested in a dance and pantomime group. We have enough of that in the church and it’s not effective for evangelism.’”

Nonetheless, Johannes’s boss asked him to humour them and take care of the team. He agreed, and in August of 2008, a combined team from DRIME Vancouver and DRIME Brasil arrived in Asunción. Johannes put on his game face.

“It’s just another missions team or whatever,” he remembers thinking. “They’re going to do some weird dancing, and I can handle that for a week or two.”

However, after their first time of ministry, Johannes pulled aside the team leaders and shared what he thought. It wasn’t anything like what he’d been told.

“It’s not dancing and pantomime. It’s a great evangelistic tool,” Johannes explains. “It is very intercultural. Just the fact that you can do it in Canada, Paraguay, Togo, and even Hong Kong, your result is the same. People stop, look and listen. Sure, the way you engage in conversation is different, but the tool is the same.”

After Johannes graduated from Bible college in Germany in ‘04, he had the choice between returning to his home church in another part of Paraguay, the Chaco, or remaining in Germany to co-pastor, church plant or work at his alma mater.

“I prayed about it, and God said: ‘Asunción.’ Very clearly, ‘Asunción.’” Johannes remembers clearly that there was no doubt about what he heard. “I was like: ‘God, did you hear me? That wasn’t one of the options—’ ‘Asunción.’ ‘I don’t know what I’m going to do.’ ‘Asunción.’ ‘But how—’ ‘Asunción.’”

Johannes’s wife, Gabi, had attended a Bible college in England, and had the same sort of leading: she heard ‘Asunción’ with no other direction. They married and moved to the city without much guidance, and Johannes started teaching at a local Bible college. (“That’s the irony of it all: that they asked me to teach on calling, but I didn’t know my calling.”

After that first time of ministry with the DRIME team in 2008, Johannes pulled out a list that he and his wife, Gabi, had written a few years earlier. They had prayed and written a list of what they’d like to achieve in the next few years. “It was kinda like our compass,” Johannes explains, “and one of the things on there was having a theatre group for evangelism.”

Johannes and Gabi hosted the next DRIME team in 2009, and were instrumental in the 2010 “DRIME base plant” (the start-up process of DRIME Paraguay), hosting the Canadian DRIMERs and connecting local leaders with them. 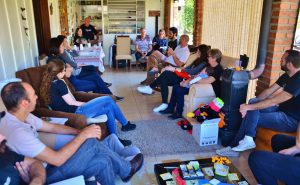 Since the team launched, Johannes stayed connected with DRIME Paraguay. He would meet with the leaders for training on leadership or conversations, how to reach more people or to get more churches involved. “I’m not the king of strategic planning stuff, but I did a lot of that in Jesus Responde for a number of years, and did a lot of pioneer work for them, so it’s an area I feel confident in.”

In 2014, Johannes started to feel like he had an idea for the greater DRIME community, and as he was formulating a pitch for DRIME International, to get more involved in training leaders for DRIME, DRIME’s International Director contacted him and invited him to be the Regional Director for Latin America, training and encouraging DRIME’s teams throughout Latin America.

Johannes accepted the position and committed to be a part of DRIME’s work from 2015-2020. “It’s a lot of strategic planning and leadership development, and that’s why I said ‘yes’ to help DRIME grow to 20 new teams by 2020,” Johannes explains.

“That seemed like a good challenge. Let’s do it.” 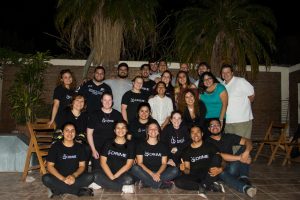 Ten years ago, Johannes barely agreed to host a “dance team” for two weeks, but now he mentors and equips the leaders for the DRIME ministry throughout Latin America – in Paraguay, Brazil, Mexico, and other countries where DRIME teams are starting up. It’s not what he expected when he welcomed that first team at the airport in 2008. It’s not a path Johannes could have predicted when he moved to Asunción, following God’s clear call to a place, but not a ministry. All along, however, God was providing the right role, the right calling and the right ministry for Johannes, and to help make Jesus inescapable throughout all of Latin America.