It was a brisk night in Autumn, and I wasn’t solely shaking due to the cold. I had a buzz running through my body, like I often do on ministry nights. I approached a man sitting on a bench with his dog, and our banter remained fairly light, until he asked me what the dramas going on in the background were all about. After I told him that the man in white depicted Jesus, he told me something about himself and asked me, “Do you think I’m going to hell?” My light-hearted demeanour almost instantly disappeared. At the same time, I sensed that his pointed question came from hurt and rejection from the church.

I told him that if he desired an honest answer, it was necessary for me to give him a glimpse into God’s character. I told him that I don’t believe what he told me equates with going to hell, but what I do believe results in eternal separation from God is not putting sole faith in Jesus. In the nature of being honest, I told him that his question made me uncomfortable.  He matched my honesty and became even more vulnerable with me, opening up about how he’s been hurt and rejected from people involved in organized religion. 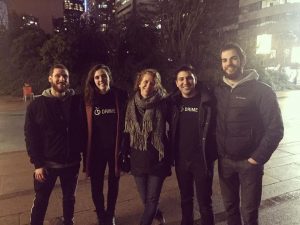 I noticed that even though the tone of our conversation started off very serious, the overarching tonethrough this very raw and real human interaction was love. He even mentioned at the end that this was the most pleasant conversation he had ever had about this topic before. And I believe it was because I didn’t solely give him what he was originally asking for. Although he seemingly wanted a yes or no answer, I sensed that what his heart was truly yearning for, was God to be reintroduced to him through acceptance. He’s never known that type of God.

So all this to say; listen. Not only to what people are saying, but to what motivates them to ask the questions they ask. So often our job is to reintroduce people to Christ, because all they know Him to be is a “God of fear and hate”. In doing that, it’s not so much about what we say, but in how we listen. They may have an idea of how we might respond based on negative experiences with Christians in their past, but we are to take the hurt, take their defence, and give them a glimpse into an interaction with Christ.

DRIME Vancouver’s ministry season runs from September to April. Check out their Facebook page to learn more about the team!